htty is a console application for interacting with web servers. It’s a fun way to explore web APIs and to learn the ins and outs of HTTP.

It couldn’t be much easier.

The things you can do with htty are:

Here are a few annotated htty session transcripts to get you started (terminal screenshots shown here are also available in textual form).

This simple example shows how to explore a read-only web service with htty.

You can point htty at a complete or partial web URL. If you don’t supply a URL, http://0.0.0.0/ (port 80) will be used. You can vary the protocol scheme, userinfo, host, port, path, query string, and fragment as you wish.

The htty shell prompt shows the address of the current request.

The get command is one of seven HTTP request methods supported. A concise summary of the response is shown when you issue a request.

You can tweak segments of the address at will. Here we are navigating the site’s path hierarchy, which you can do with relative as well as absolute pathspecs.

Here we add query-string parameters. Notice that characters that require URL encoding are automatically URL-encoded (unless they are part of a URL-encoded expression).

The headers-response and body-response commands reveal the details of a response.

There was some cruft in the web service’s response (a horizontal line, a passage reference, verse numbers, a copyright stamp, and line breaks). We eliminate it by using API options provided by the web service we’re talking to.

We do a Julia Child maneuver and use the address command to change the entire URL, rather than add individual query-string parameters one by one.

Exit your session at any time by typing quit or hitting Ctrl-D.

The next example demonstrates htty’s HTTP Secure support and cookies features, as well as how to review and revisit past requests.

Notice that when cookies are offered in a response, a bold asterisk (it looks like a cookie) appears in the response summary. The same cookie symbol appears next to the Set-Cookie header when you display response headers.

The cookies-use command copies cookies out of the response into the next request. The cookie symbol appears next to the Cookie header when you display request headers.

Note that history contains only numbered HTTP request and response pairs, not a record of all the commands you enter.

The reuse command makes a copy of the headers and body of an earlier request for you to build on.

Assume that we have the following Sinatra application listening on Sinatra’s default port, 4567.

This application expects GET and POST requests and responds in various contrived ways. 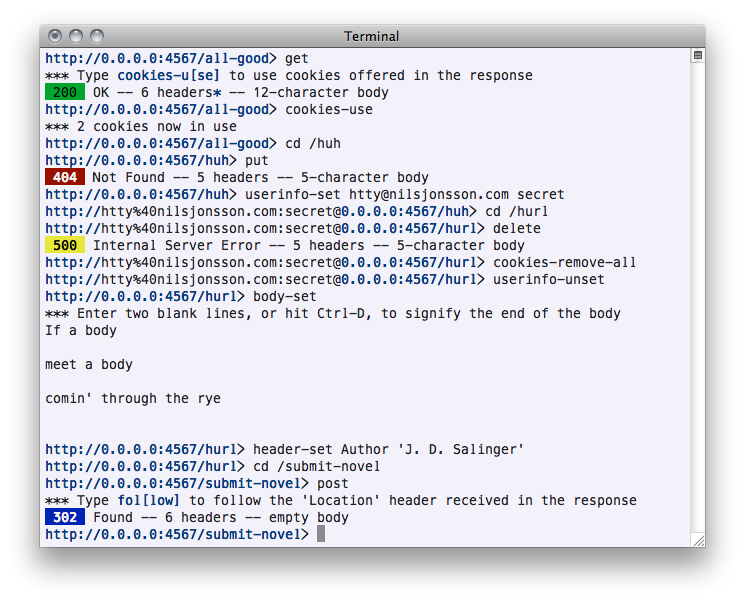 When you change the userinfo portion of the address, or the entire address, the appropriate HTTP Basic Authentication header is created for you automatically. Notice that characters that require URL encoding are automatically URL-encoded (unless they are part of a URL-encoded expression).

When userinfo is supplied in a request, a bold mercantile symbol ( @ ) appears next to the resulting Authorization header when you display request headers (see below).

Type body-set to enter body data, and terminate it by entering two consecutive blank lines, or by hitting Ctrl-D. The body will only be sent for POST and PUT requests. The appropriate Content-Length header is created for you automatically (see below).

Different response codes are rendered with colors that suggest their meaning:

As with the abbreviated history demonstrated earlier, verbose history shows a numbered list of requests and the responses they elicited. All information exchanged between client and server is shown.

You can learn how to use htty commands from within htty.

The help command takes an optional argument of the abbreviated or full name of a command.

Your patches are welcome, and you will receive attribution here for good stuff. Fork the official htty repository and send a pull request.

After cloning the repository, bin/setup to install dependencies. Then rake to run the tests. You can also bin/console to get an interactive prompt that will allow you to experiment.

To install this gem onto your local machine, bundle exec rake install. To release a new version, update the version number in lib/htty/version.rb, and then bundle exec rake release, which will create a Git tag for the version, push Git commits and tags, and push the .gem file to RubyGems.org.

Stay in touch with the htty project by following @get_htty on Twitter.

You can also get help in the #htty channel on Freenode.

The author, Nils Jonsson, owes a debt of inspiration to the http-console project.

Thanks to contributors (in alphabetical order):

Released under the MIT License.